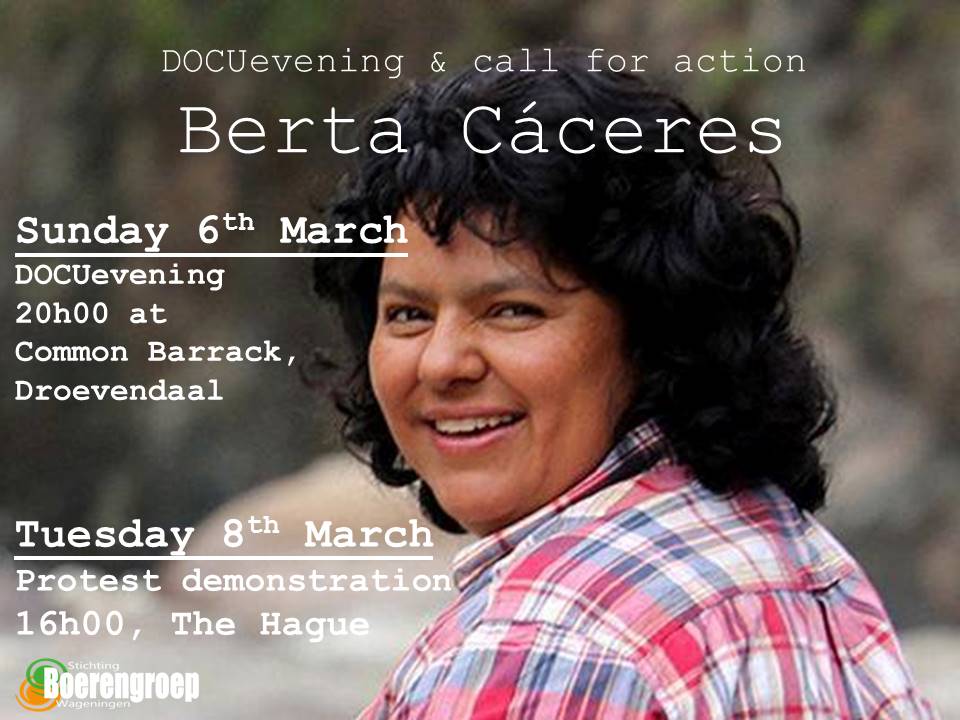 Berta Cáceres was murdered last Thursday, March 3 by ‘unknown gunman’ in her house. She was an indigenous leader and spokesperson of the Civic Council of Popular and Indigenous Organizations of Honduras.

Berta was a firm defender of small farmers and indigenous peoples’ rights and an inspiring social activist, both at regional and continental level, in defence of social and environmental justice, particularly against mining megaprojects and hydropower plants.
This Sunday, we will come together to watch a short movie on her work. We will have a discussion afterwards and we will organise to join the protest in The Hague on 8th of March.
Tuesday 8th of March, International Woman’s Day, we will join the protest demonstration at the Honduran embassy in The Hague at 16h00 to protest against her murder and demand from the government of Honduras:
– To put an end to impunity and hold a thorough investigation into the murder of Berta Cáceres, as well as into all other social and environmental justice activists.
– To ensure the integrity, freedom and respect of the Human Rights of Gustavo Castro de Soto and of Aureliano Molina (arrested at the home of Berta Caceres)
– To suspend all projects that have been denounced by Human Rights defenders, among which the Hydropower plant Agua Zarca on Rio Blanco and the Blue Energy project on Rio Cangel. – All corporate & IFI financing and investment to be suspended for all Projects that have violated HHRR and where there has been no free prior and informed consent, according to ILO Convention 169.
– To put an end to persecution and criminalization of Human Rights defenders and to implement with all precautionary measures for the integrity and safety of people.
Facebook event of the Demonstration
Interesting background info, with video from the documentary Resistencia (2014)

Human Rights, Resistance and the Movement for Peoples’ Power in Honduras