on Sustainable Agriculture and Food Production 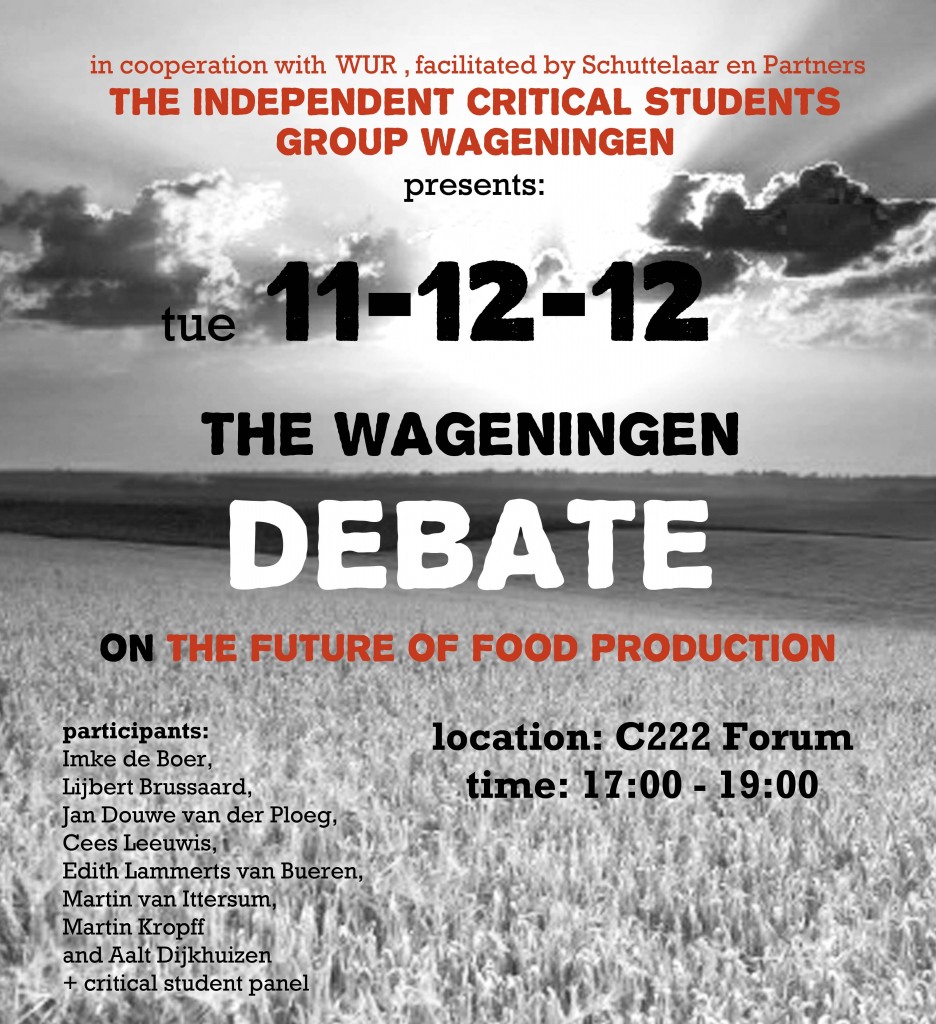 At the beginning of the academic year Aalt Dijkhuizen made some remarkable statements about the intensification of agriculture as the only viable option to feed the growing world population in the future. Following this, a group of WUR students organized a students demonstration in Forum to protest against Dijkhuizen’s claims and the way he represented a pluriform institution the way he did.

As a follow-up to this students-initiated initiative, a university-broad discussion on the future directions of agriculture and the role Wageningen UR as an expert institute in this debate will be organized.

The main goal of this debate will principally be to inform the Wageningen students and public about the pluriformity of approaches to agricultural development that Wageningen UR embraces. Therefore, experts from all five different pillars from Wageningen UR are invited to participate. As well, by organizing this debate, it is aimed to internally and openly further the academic discussion about the future directions in agricultural development and food production between the various actors involved. A third aim will be to actively discuss the role of Wageningen UR in the public debate.

The debate will be organized by the Independent Critical Students Groups Wageningen in collaboration with Wageningen UR and Schuttelaar en Partners, last of which will facilitate the debate.

All students and faculty members are invited to attend and participate.

When: December 11th from 17h-19h
Where: room C222 of the Forum Building
Registration: not needed
More info: here

Propositions for the debate:

1: Striving for a sustainable food producing  system seems almost obvious today. In practice, this seems not to be so simple. Sustainability, according to some, includes numerous conflicting themes. Improving animal welfare for example could be detrimental to the ecological footprint. Producing organically would require more land. Can we speak of a particular tension in the concept of sustainability and if so what about it? ”
with professors: Imke de Boer, Lijbert Brussaard, Cees Leeuwis.

2: ”What does the ideal food producing system look like? (And what assumptions (such as rising prosperity, increase or decrease of animal protein consumption, ability to change behavior, etc.) are underlying?)”
with professors:  Jan Douwe van der Ploeg, Martin van Ittersum, Edith Lammerts van Bueren.
The debate will be in English. The debate will be broadcasted live on WUR TV.