TTIP is the Transatlantic Trade and Investment Partnership. A trade agreement between the EU and the US which stands above national or EU law. It aims to ‘harmonize’ EU and USA regulation. They also call this ‘Mutual Recognition’ (MR). What does this mean? That corporations would be able to choose the lowest form of regulation.

Boerengroep is going to an international organized peaceful demonstration against TTIP in Brussels as we DO NOT want:
– Importation of unsafe foods (and thus chloride in our chicken breasts!)
– Destruction of our food sovereignty!
– Lowered regulations on food safety and environmental protection!
– More unemployment

And last but not least:
– To sell our democracy!

The protest was a big success! 20 students from Wageningen, together with 4000 other people from the EU went to Brussel to protest against TTIP. Diverse cross points were blocked with farmers and their tractors. One farmer told us that he drove four hours to come to Brussel, but it was worthwhile, because TTIP? Should be stopped immediately!

Unfortunately the politician shortened their meeting with one day, probably to avoid the demonstration and barricades.

Movies about the demonstration:

GUE/NGL at anti-austerity protest in Brussels 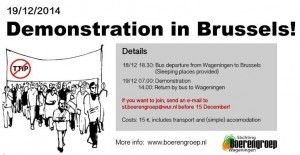