Home » Events » Lunch lecture with Stephen Sherwood: The criminalization of agroecology in Ecuador

The criminalization of agroecology in Ecuador: The October national strike and state-sponsored violence against the public over responsible food. 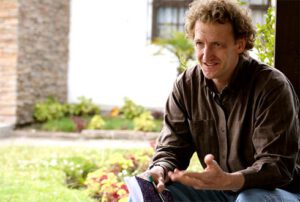 During this lunch lecture, Stephen Sherwood (farmer, researcher and activist in Ecuador) will summarize how Ecuador’s lively agriculture and food movements have stepped up to promote agroecology and responsible consumption as means of assuring food as a public, common good.

The movements approach food as a radical form of direct democracy – “food of the people, by the people, for the people” in the context of the rise of Ecuador as a modern police state at the service of private industry.

In the process, the movements’ activity has led to a series of public confrontations with the food industry and the state on multiple fronts. This includes the defense of the constitutional prohibition of GMO seeds and crops, the obligatory labeling of products elaborated with GMO crops, and the protection of public markets vis-à-vis the aggressive activity of supermarkets in localities throughout the country.

As experienced during the October National Strike, actors involved in the promotion of agroecology and responsable food increasingly have become the target of violent repression. “The people’s food” has been placed front and center over the present and future possibility of healthy, sustainable, socially equitable living and being.

BACKGROUND
In Ecuador, family farming, in particular of the indigenous or first nation populations, provides about 70% of the food that people eat, and it generates about 30% of the county’s employment. Nevertheless, over the last fifty years, public policy in the form of agriculture and food modernization has increasingly targeted and undermined family farming.

In October 2019, the Confederation of Indigenous Peoples (CONAIE) and other rural people’s organizations, called a national strike that mobilized hundreds of thousands of people over ten days. Ostensibly, this was over the imposition of an aggressive austerity plan imposed by President Lenin Moreno and the International Monetary Fund. In practice, however, the austerity plan arguably was merely a spark that made public concerns over the deepening, radical modernization of agriculture and food.