Home » Farmers’ Tales: Highlights of Petra, Jesse and Jessica. And what’s up next?

In the last few Fridays before the well-deserved Christmas-break at the WUR, the speaker’s corner of Impulse was again occupied by lots of interesting students who came to enrich their lunchbreak. It was time for Farmers’ Tales; a series of dialogue where farmers, researchers or students are invited to share their experiences and tales on the practice and politics, narratives and nuance of food production. Some time had passed since Boerengroep organized a series of Farmers’ Tales: the latest edition being on the 6thof June 2019 with speaker Elske Hageraats, who discussed the complex question of how the world to feed the world.

On the 29thof November we were happy to have Petra Derkzen, active at the biodynamic Ekoboerderij de Lingehof, talk about herself, de Lingehof and various biodynamic principles being applied at the farm. Back in the days this used to be a dairy farm, which is recognizable when entering the farm; the deep-stable is still there and in wintertime young cattle from neighboring organic dairy farms inhabit the place. Collaboration has always been an important value for de Lingehof. Located closely to the Wageningse Heuvelrug (Ridgeline), the farm has developed an intensive relationship with several WUR chair groups. Throughout the year many excursions are hosted here, as well as interns interested in biodynamic agriculture. Petra challenged the audience to think along: what does it mean to practice biodynamic agriculture?

Students at first seemed a bit hesitant but they were thinking in the right direction. It indeed is quite similar to organic farming as there is strong emphasis on e.g. soil-health and excluding the use of synthetic fertilizers. However, biodynamic farming goes a couple steps further; it is a holistic, ecological and ethical approach that combines the connection between farmer, soil, plants water, animals and the cosmos. One important principle is that the farm is seen as an integrated, whole, living organism. All elements of this living organism are interdependent and need to be managed in a way that supports vitality and harmony of the whole. Biodynamic farming also embraces spiritual and mystical perspectives, which are not necessarily backed-up by science. For example, Petra briefly explained about how constellations of the cosmos are considered in the planting-sowing calendar. She observed that timing the moment of sowing according to such astrological influences notably benefits plant growth, which is really interesting!

One student noted that one biodynamic element is missing at de Lingehof. Petra admitted; no animals permanently stay or work at the farm, while one of the principles states that natural ecosystems include both plants and animals, which work together to fill complementary roles in the web of life. Earthworms, however, belong to the animal kingdom as well and do play a role at de Lingehof. Besides, through collaboration with neighboring farms there still is some animal input. Most remarkably; cut-off cow horns are used to fertilize the field. This raised some questions which Petra tried to answer in the little time that was left. Essentially, as the horns are spiritually believed to be receptors of the sun and light and can therefore activate the soil. Cow horns do not point up to the sky for no reason. You can find more information about this practice on the internet. I think I can speak for all when I say that Petra brought new insights about the line of reasoning in biodynamic agriculture. This brief summary definitely did not cover all aspects, if you want to learn more you can find information at: http://ekoboerderijdelingehof.nl , or simply consult the internet.

By the way, if you are interested in adopting your own old-Dutch apple-tree, which are managed by people from de Lingehof and de Stroom, you can do so by registering at: https://hoogstamfruithemmen.nl.

Farming at the end of the world

On the second edition of December 2019 the floor was taken up by Jesse Opdam and Jessica Snoek. After graduating at the WUR, the two travelled to the West Ardnamurchan Community Garden, located at the most westerly part of the British mainland. For half a year Jesse and Jessica worked to produce a wide variety of fresh vegetables and fruits including apples, strawberries, lettuce and chard, green peppers, pumpkins, carrots, beets, potatoes, curly kale and much more. With the nearest supermarket located a two-hour drive away, it surely is a good thing the farm is highly productive. One interesting eye-catcher at the garden is the “Poly Tunnel”, a greenhouse-like structure as visible below. Over 800 kilos of veggies and fruits were cultivated in the poly tunnel within half a year. An experiment initiated by the two turned out successful too: oyster mushrooms flourished on a mixture of straw, sawdust and locally sourced coffee-grounds. Produce sold at the local farmers’ market created enough revenue to cover the costs of living!  Jesse and Jessica not only had an amazing time staying at the garden, by getting their hands dirty they left the place with valuable knowledge on farming in a temperate (Dutch-like) climate. This comes in handy as the two are now looking to start a farm here, in the Netherlands. If you are interested in visiting the West-Ardnamurchan Community Garden you are more than welcome to do so, you can contact them on Facebook! 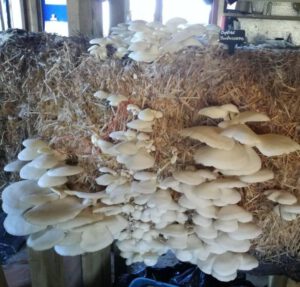 The next confirmed Farmers’ Tales edition is scheduled for Monday the 27thof January 12.30-13.30PM, where Lisa Fellmann and her colleague Laura. They will share the experience of taking over a little vegetable farm in Amsterdam-West. Lisa developed the business-plan as part of her internship and now the Stadsgroenteboeren (City-vegetable-farmers) are up and running. They will tell us all about the CSA business, how it came to be, and what the journey looks like setting-up such a business as an internship with WUR. A unique opportunity to gain real interesting insights whilst enjoying your lunchbreak. See you there!