Home » How can higher food prices be made inclusive? 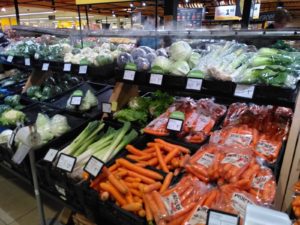 It was probably obvious that CU’s Carola Schouten would be given interim acting responsibility for the recently unmanned portfolio of the Minister of Agriculture, Nature and Food Quality. Given her experience in this particular area gained during her ministry in the Rutte III Cabinet, it might also seem quite logical to many people. However, there is an important development in her CV that makes it interesting that she has become the acting person for the portfolio. Namely, that she is now also Minister of Poverty Reduction in the current cabinet. Is this a godsend? Perhaps the role of an interim acting minister is pretty empty. But still, it must be asked. Can we finally talk seriously about the one of the much-needed measures the current climate and environmental crises and agricultural transition call for? Namely: fair and true food prices?

In a context of two major societal challenges, her portfolios now seem to converge. First: rising energy and food prices put many more Dutch people in precarious financial situations than there already were. And second: a multi-level destructive agricultural system that is in transition to sustainability but is trapped by low food prices which cannot pay for this transition. For a long time, there have been calls from all corners and places on the political spectrum for the real price of food. A price that takes the “externalities” into account. In other words, which includes the social and environmental costs of the destructive agricultural system. The introduction of these true prices is almost always resisted with the argument that food would become unaffordable for very many Dutch people. And this is certainly the case. There are an estimated 900,000 people in the Netherlands living in poverty, many of them children. The current energy crisis and high inflation certainly don’t seem to be reducing this number. Currently the news talks of ever higher numbers of people going to foodbanks in order to get by. At the same time, the market for organic food is suffering under people’s pressure to buy conventional cheap food.

But a crisis also offers opportunities: now that food, energy, and rent are becoming unaffordable for such a large group of Dutch people and winter is approaching, intervention is a must. Another great opportunity: many companies and also some individuals are taking advantage of this crisis and putting the profits in their own pockets. How can this be allowed? With the taxes that could be collected from these so-called crisis profits – which are literally made only because price increase and not because of earnings from hard work or innovations – a lot of help could be financed for the citizens for whom food becomes inaccessible when the real price is introduced. And if farmers can then get the real price for their products, perhaps steps can finally be taken toward less intensive nature-inclusive agriculture, more sustainable technologies or just a liveable income. Perhaps that offers some more future perspective as well?

Making this happen will require brave choices. Like giving supermarkets a legal obligation to pay a certain (read: fair) price to farmers. Do they balk? They should have come and talked to Remkes. Or substantially taxing the big players in agribusiness and crisis profits. Do they balk? Ah, is there any sympathy for those who have profited from decades of agrarian capitalism and can with a little less? Or, have Rabobank take the responsibility, let the bank see that investing without sustainability also has risks and sometimes you can lose your money – we could cancel some problematic debts. Or abolish VAT on organic produce and unprocessed fruits and vegetables. Do frozen French fries and pizza producers also want to include fruits and vegetables? … come on. If some parties will not or cannot voluntarily be a substantial part of the solution, that is where the government should be, enforcing big steps, and breaking the impasse between farmers and government by also holding the wealthy parties responsible for their role. Now everyone seems to just point at each other and nothing substantial changes.

What we need is a long-term vision for current agricultural problems and poverty alleviation. An agricultural vision with perspective for farmers as in the green farmer plan or re-rooting the Dutch food system (e.g. by Imke de Boer) cannot be at the expense of Dutch people living in or on the border of poverty. Not an easy task in the current political playing field. But with a vision and a story a lot is possible, as the past has shown. Carola Schouten, you can do it!