Home » March 26: Economic Partnership Agreements between the EU and Africa – who benefits?

The EU is currently negotiating “Economic Partnership Agreements (EPAs)” with various African states. These agreements have the goal to stimulate trade between the regions and thus promote economic prosperity. The idea is that African countries open up their markets to European imports, and receive customs-free access to the European market in exchange. However, the question is whether the benefits of the EPAs will be equally distributed. Critics fear that free trade will endanger the developing industry in many African countries, who might not yet be able to compete with the European counterparts. For these and other reasons, several countries (such as Kenya) have refused to sign the agreement. Dr. Burghard Ilge from the NGO “Both Ends” will share his views on the EPAs. 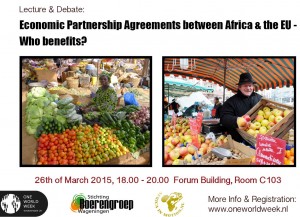