Home » Interview with a Boerengroep Board member

Boerengroep is made by a multitude of people, and we thought it’d be nice to regularly introduce one of our board members in the form of a small interview. Who are the people in Boerengroep? Where do they come from? And what do they see in Boerengroep?

This week we’re happy to share some facts about Aron Ortega, who first got to know Boerengroep during last year’s Farm Experience Internship. 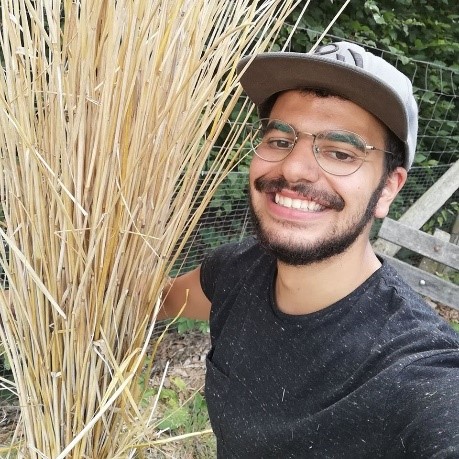 My full name is Aron Emilio Ortega, but a lot of people call me Arie something my sisters came up with when I was young.

I was born and raised in The Hague, which is at the west coast of the Netherlands. I lived close to the sea, about 10 minutes by bike. The dunes were my favorite place to go during summer to run or cycle.

No, the closest that we had to a farm in my neighborhood was this little petting zoo for children, with goats, sheep, chicken, bunnies and guinea pigs. In the last years of high school my mom rented a small garden at which I helped her out sometimes, this is probably also where my passion for plants started.

I am currently in my 2nd Master year in Plant Science with as focus Plant-Plant interactions and Plant Breeding. I started in Wageningen in September 2014 with my Bachelor Plant Science and I graduated in April 2018.

I first heard about the Boerengroep in the summer of 2017 when a friend of mine joined the FEI (farm experience internship). She said it was a really nice experience and told me to join next year. In 2018 instead I decided to work at Unifarm (experimental fields of the University) during the summer. So when in February 2019 I saw the poster about the FEI I went to the info lunch and signed up a few weeks later. During the FEI I learned about what Boerengroep was as how much new things I could still learn about farming.

And how long have you been active in the Boerengroep?

Last October I attended my first Boerengroep break and decided I wanted to be more involved in Boerengroep. A few weeks later I join my first board meeting.

I feel like I found my place as critical mind within Boerengroep. Asking questions and discussing difficult subjects is what I do best. But most of all I learn from all the different things that Boerengroep has to offer.

Can you give us something secret away about the excursions?

Sadly, Because of Corona physical visits to farms are not possible the coming months. But maybe through the digital, audiovisual space we can still have a taste of the special life of farmers in this harsh time.

Wednesday evening I do sports, I have been a member of the student handball a associations WHV Centauri for almost 6 years now. After the training on Wednesday we have a beer (or two) in the Bongerd sports Pub with the team.

I would be a scarecrow, just standing in the field making funny and scary faces to each and everyone that stops by. Unfortunately you don’t see them a lot anymore these days.

Definitely the FEI (farm experience internship), during these 4 weeks I learned so much new things about farming. Working at the Ommuurde Tuin was a lot of fun and all the people I met during the FEI gave me a whole new perspective on life.

I would tell Carola Schouten to join the FEI ? to learn more about different ways of farming. I would also ask here to invest more in education on sustainable farming for both farmers and young potential farmers.

Who is your farming hero? And why? (like a favorite product?)

Norman Borlaug, not a farmer but an Agronomist. He is seen as the father of the Green Revolution and had a large contribution in increasing agricultural production in places where it was needed. Although nowadays the consequences of this intensive way of farming are controversial I still believe he did what was needed to save a lot of people. The same thing we have to do right now by turning the agricultural model he helped designing towards sustainability.

The last 6 years I have slowly been moving from monoculture to polyculture. At the moment I believe that the only way we can still feed everyone by 2050 is to combine high productivity with sustainable farming practices. Since the most important thing I have learned the last years is that there is not 1 good way of farming.