Home » Small reflection on Fair Income for Farmers I 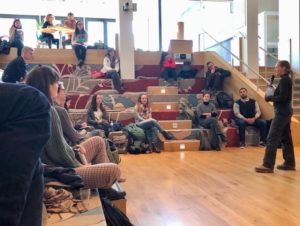 Last week Wednesday the introduction of the fair income for farmers events took place. Even though it was very sunny and warm outside, still quite some people showed up. First, Elske introduced the topic. It was surprising to hear that so many farmers in the Netherlands earn below the minimum, especially if you don’t take into account the subsidies. Income for farmers is not only a problem in this country, but also worldwide. When Elske started to farm, she only earned 5 euros per hour and thus could not even pay experience nor a pension. Her choice to become a farmer was thus mostly idealistic, which is probably similar to a lot of young farmers nowadays.

Then the documentary started. We heard about the story of 4 farmers that worked on CSA’s in Renkum and Ede: Elske, Esther, Klarien and Maria. Even though, these farms are very ecologically sustainable and produce with hardly any inputs, they weren’t financially sustainable. Esther mentioned in the documentary that it took her 3 years before she was only breaking even and could actually earn something for herself. The solidarity payment system tries to fix these issues, by giving the farmers produce for free and letting the people decide how much they are willing to give. The farmer only to wants to get the costs covered and that he/she gets a fair income per hour. Therefore, it is solidarity not only to the farmer, but also to people buying the produce, as people with lower incomes can also afford organic products. The farms that were used in the documentary are all small scale CSA’s. Klarien also called them “human scale farms”, as it is agriculture on a human scale, reconnecting ourself with our surroundings. 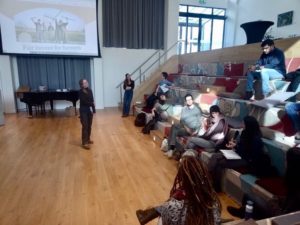 In the discussion that we had after the documentary we came to the conclusion that income issues are not only a problem in the global south, but also in the Netherlands. It was interesting that also some farmers showed up, and they could relate well to the things said in the documentary. We discussed about the power of supermarkets, possibilities of shorter supply chains and young farmers that already seem to accept that they hardly get paid anything.

The documentary is available on Youtube via this link: https://www.youtube.com/watch?v=5mKjggqKBdg&ab_channel=connectingtofood