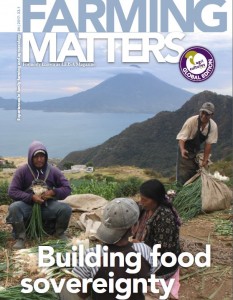 In the last 30 years, more and more people are defending and promoting the right to control their own food, agriculture, livestock and fishery systems, and the policies that affect those systems. ‘Food sovvereignty’ is a term that encapsulates these efforts, and that has catalysed many social movements. It entails people’s control of natural resources and markets, including access to land, seeds and water, as well as fair prices for small scale producers. Food sovereignty holds the wellbeing and local knowledge of producers and consumers at the centre of food practices and policy. Importantly, it stipulates the right to healthy and culturally appropruiated food, and values environmentally respectful production practices. Read more: Building Food Sovereignty. Farming Matters 2017. Download pdf hier inschrijven