Home » Stephen Sherwood about The criminalization of Agro-Ecology in Ecuador 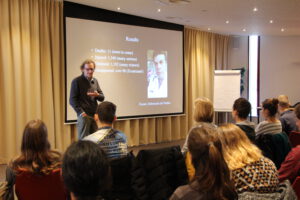 On the 6th of November, Boerengroep, Otherwise and Cultivate were pleased to welcome Stephen Sherwood for a talk about the recent protests in Ecuador, and the link to food. Originally from the United States, Stephen has been living in Ecuador for the last twenty years, where he has a organic farm. Next to that, he is also a guest lecturer and a researcher at Wageningen University.

Stephen started his talk with an overview of the national strike that took place in the beginning of October this year. He first talked about how the national and international news portrayed the strike and the protest marches, and then about how he, being in Quito, experienced it. The international news seemed to be quite unaware of what was actually happening, and they mainly took over the discourse of President Moreno. Moreover, there was a lot of misinformation, probably instigated by the government. Several news items that appeared on social media were simply false, for example, a small film showed up of a mestizo man pretending to be an indigenous leader and urging the people in Quito to make sure they have enough provisions because they were going to have violent protests in the city, but this man wasn’t known at all among the indigenous groups and was more likely to belong to the national army.

Soon after the initial strike, Ecuador turned into a full-on police state. They arrested a lot of people, of which many are underaged, and introduced a curfew: between 8 PM and 5 AM, nobody was allowed on the streets. This gave the police an incentive to violently pick up anyone who did happen to be on the street. Furthermore, there’s a lot of footage of wounded and disfigured protesters and at least 12 people have been confirmed to have died.

The direct spark that led to the protests, was a large increase of the fuel prices. The government decided to do this to obtain the millions of dollars they needed to pay back the loan. At the same time, taxes on cellphone, tablets and farming equipment were removed and public workers lost certain benefits.  This was all part of an austerity plan, called “El Paquetazo” informed by the IMF, the kind of plan that many other Latin-American countries are familiar with, but that has never ended up well. The government and most news sources maintain that the fuel prices were the reason for the strike, but Sherwood stressed that this is not what most of the protesters cared about. Most of the people on the streets – of which a lot of transport unions and taxi drivers, workers unions, indigenous groups and farmers, but also a lot of students – don’t even own a vehicle. Furthermore, Stephen pointed out that the industrial food industry also played an important role in the changes leading up to the protests. A lot of new legislations against people’s food had been passed, such as a seed law that makes the exchange of seeds more difficult, a Código Orgánico de Salud which urges against breast-feeding and a Food Safety Law, that makes it nearly impossible for family farms to process the produce on a farm-level.

When Stephen talked to the indigenous protesters, a lack of market for the produce of their small-scale farms, was what drove them to take to the streets. Slowly the farmers’ markets on which most of the Ecuadorians relied on for their food, had to make way for new supermarkets, that sell heavily processed foods and thereby lead to a steep increase of obesities among the Ecuadorian population. These supermarkets and the large, international companies that sell through them, are stimulated by the Ecuadorian government, and often have close ties with the politicians. The industrial food that overflows the Ecuadorian market typically contains GMO’s and cheap, processed sugars and fats. Small-scale farmers produce about 70 percent of the food and 30 percent of the country’s employment. But as the share of the food industry in Ecuador’s food market increases, they find it increasingly difficult to sell their produce. The right to produce healthy food and for consumers to have access to this, is threatened by the current government that plays under one hat with the big agro-industrial companies. The current government has made peasant farming, which used to be the only kind of farming, a lot more difficult. And when the people in Ecuador rose up against all kinds of new legislations that only serve the few, they were criminalized. But Stephen also notes that, even though the local media pretend like everybody is against the protests, in fact a lot of people in Quito supported the marches and this is surely something to be more hopeful about. 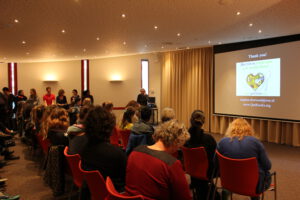