Home » Thinking of the excursion to Ecological Farm Overesch

On December the 7th we visited the ecological farm Overesch. We had seen the farmer Jan Overesch appear in the media in autumn about the farmers protests and became interested in visiting his farm to learn how he was dealing with the nitrogen crisis and why he did not feel called for to join the other farmers in their protests.

Jan and his wife Mariet gave of a presentation in their visitors centrum, which was built above the main pig stable as a sort of skybox, with windows from which we could look down upon the pigs downstairs. Jan and Mariet are not scared of having their production methods displayed so honestly, which says a lot already.

In their talk it soon became clear why he did not participate in the farmers protests. They run a biodynamic, circular and biodiverse farm. The core business of his farm is raising pigs. But in total he only has around 800 pigs on his farm, which is compared to conventional pig farms only a small amount. Besides these pigs they grow a variety of about eight crops. The pigs produce enough manure to fertilize their fields, and on their fields enough food is grown to feed their pigs. The pig manure is first mixed with straw residues from their own wheat and composted for some time before being applied to the field, to reduce the environmental risks associated with slurry manure. 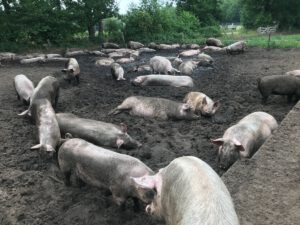 Their pigs have more space, stay longer with their mothers, stables are bedded with straw and the sows can enjoy an award winning mudpool outside all year long. There is no quarantine environment. We were allowed to walk amongst the sows and touch them. They were dirty as pigs are supposed to be instead of being treated clinically. Because their pigs are being exposed to dirt from their time of birth, they develop a robust immune system which in turn enables the farmers to run their farm biodynamically, without the extensive use of antibiotics rampant in conventional animal agriculture.

On some of his farmland even less than the biodynamic standard for fertilization is allowed due to biodiversity and landscape conservation efforts. But he farms the land anyway, embracing the lower productivity of these fields for the other services it provides.

It was a great experience to visit such a forward thinking farming family and a great example of a circular and nature inclusive farm. After paying a visit to the on-farm shop we returned home satisfied.