“Young people don’t want to work in agriculture.” Boerengroep shows that this statement is not the case! In fact, there are many young people who want to work the land again, as a way to work towards food sovereignty, connect to the earth, and to build, defend and strenghten the agroecological movement. Despite the many challenges we face (e.g. access to land, money, knowledge, market), we find creative ways to turn our dreams into reality.

One of the key principles and values of agroecology (Adapted from the Declaration of the International Forum on Agroecology (2015)), states that “Agroecology can provide a radical space for young people to contribute to the social and ecological transformation underway in many of our societies.”(Declaration of the International Forum on Agroecology (2015)). Therefore, Boerengroep considers it of crucial importance to highlight the aspirations, as well as the challenges of young (future) farmers as a way to secure food sovereignty in the future.

“We Take the Lead”
This issue of Farming Matters shows that young people are, and have, the future in agriculture worldwide. It considers the roles, priorities and responsibilities of young generations.  (ILEIA, 2011; download here..)

New Entrance in Agriculture.
The Landworkers’ Alliance New Entrants policy paper announces a number of targeted policies to support New Entrants in post-Brexit UK agriculture. The proposals include increased funding for training and apprenticeships, a new-entrant capital grant scheme and an immediate halt to the sell-off of council owned farm estates.
Since the introduction of area-payments in 2005 the price of farmland has more than doubled, 35,000 farmers have left the land and the average age of UK farmers has risen to over 60. Although there has been a welcome resurgence of students enrolling in the UK’s agricultural colleges and universities over recent years, the challenges of accessing land, skills and capital have ensured that very few first-generation farmers have been able to successfully enter the industry. Land Workers Alliance (UK), 2017; download here..)

Newcomers in Agriculture from the Netherlands.
This map of shows farms, gardens, horticulture, food forests and other companies, started by students from Warmonderhof, most of them new entries in agriculture. MAP 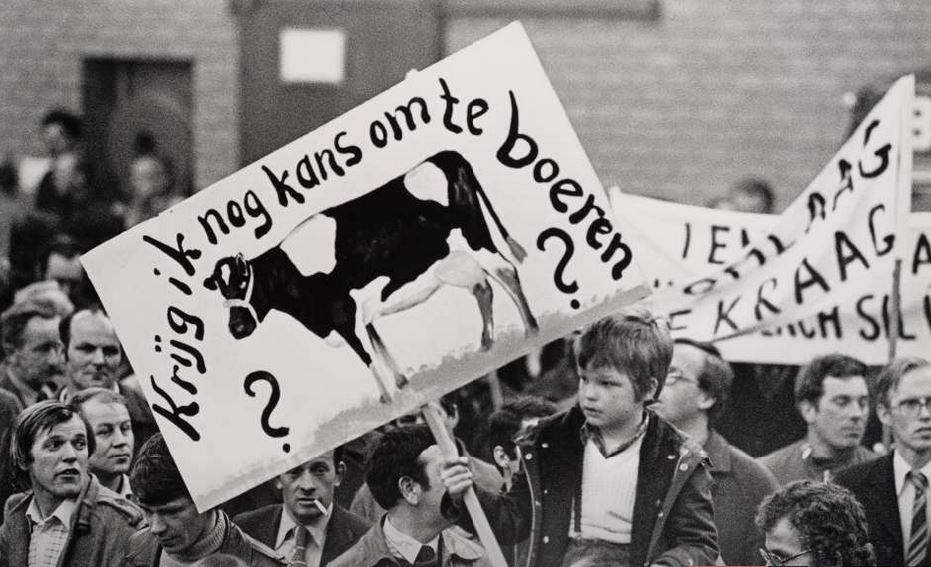 FUTURE FARMERS IN THE SPOTLIGHT

Anne Giraud (28) and Remi Lonjon (30) started their small-scale organic berry farm in the mountains near La Brigue in the South of France with the help of Terre de Liens. Next to the organic fresh small-fruit, marmalades and syrups they sell eggs from their 60 chicken on weekly farming markets and through AMAPs (=Community Supported Agriculture groups). Watch video

Emanuela Russo and Fergal Anderson moved to county Galway, Ireland in September 2011 to start a small vegetable farm. Emanuela, originally from Milan, Italy and Fergal from Galway studied Journalism and Communication and Public Advocacy and Activism respectively and could not imagine to become farmers when they graduated from high school. For the last three years Emanuela and Fergal have been politically active in Brussels working among others for Via Campesina, the international organization for peasant farmers. After some time, it became increasingly clear to them that apart from being politically engaged they actually wanted to get their hands dirty and to move to the countryside. Watch video

Lofoten Gårdsysteri is a bio-dynamic farm which is beautifully located in between mountains and the fjord close to the coast in Saupstad, Lofoten. Marielle and Hugo run the farm since 12 years. They keep 140 milk goats (a mixture of Norwegian and French alpine) which are led free in the morning after milking to disappear into the ‘utmark’, large communal lands shared by the adjacent farmers. Only at the end of the day when it is time for the second round of milking they are back wanting to go into the stables. Watch video

Before taking the decision to become farmer on the family farm, Krispijn travelled a lot and worked on a number of farms in Mexico, Morocco and the Netherlands.  The freedom of being an entrepreneur and his love for working with plants and humans made the decision to become a farmer logical for him. In spring of 2012 he became companion in the Demeter-certified company that was to this point run by his father and Peter Keij. 50 hectares of  family land and 20 hectares of leased land belong to the farm. Only 60 years ago the lands of this region was open sea. Now, drained and made suitable for farming, the mostly clayey soils are very fertile. In this region of the Netherlands, many farmers specialise in the cultivation of a limited number of vegetables, among them potatoes, onion, cabbage and carrots. Prices are on average low – especially just after harvest. The longer a farmer therefore waits to sell his/her produce the higher his chances to receive a better price. Krispijn together with the Dutch Youth Food movement were this spring involved in an action on one of Amsterdam`s main squares  ”De Dam” where he threw a tucks load of potatoes on the square. Krispijn explains why: ”A pattern of the past years is that supermarkets start to import the first harvest of spring vegetables from countries like Egypt and Israel at a time in which the sheds of Dutch farmers are still loaded with vegetables of excellent quality! At that point that the first spring vegetables are entering the market, the demand as well as the price for Dutch vegetables from the autumn before drops to almost zero. We raised awareness about this problem and got a lot of media attention and had the possibility to explain to people the irrationality of the current food system.” Watch video

Arjan Swinkels comes from a farmer’s family. His parents had a dairy farm in the South of The Netherlands but Arjan didn’t want to take over the farm. He wanted to study and chose for an office job in the first place. Only some years later, he realised that farming was the way he wanted to live and therefore followed a training on the Warmonderhof, the school in the Netherlands where one can learn the practical and theoretical aspects of starting and running an organic farm. Arjan bought his first 9 buffalos in 2010, and slowly extends the herd by keeping the female calves. Since 2012 Arjan milks the buffalos and sells fresh raw buffalo milk, buffalo ice cream and buffalo meat. Arjan’s buffalos can also be adopted: as an adoptive buffalo parent one can give a name and of course come to visit and cuddle as often as one likes. Watch video

In 2005, Welmoet de Waard (35) and Angelien Hertgers (33) were looking for land where they could start producing vegetables for their own vegetable box scheme. They wanted to rent the land, since they did not have money to buy it. Angelien: “None of the places really attracted us, until we came to Hemmen. We immediately fell in love with this beautiful and historical village! It was also fantastic that we could make an agreement with the organic arable farmer in the village. We would rent a small piece of his land and we would be part of his larger rotation scheme. We did not have to plough or fertilise the land and we did not need many machines to start with.” But the cooperation goes further: last year the vegetable girls (groentmeiden) how they call themselves moved into a part of André Jurrius´ sheds, where they have a small shop and even built a small cold storage. Welmoet: “It was a great opportunity for us since we did not have any buildings ourselves. Now we pack our 280 boxes in this shed as well and we have lunch and coffee breaks together with the workers of André. That is really nice!” Watch video

The majority of farms nowadays invest in specialisation and ever larger areas are managed by fewer people. Farm community Heggelbach in the south of Germany has chosen another path, a path of diversity. It is able to earn a living for 6 families, employees and trainees. Today the farm consists of 170 hectares, out of which 95 hectares are arable land and 60 hectares are pastures. The fodder for the 45 milk cows plus offspring and one breeding bull is produced on the farm. All of the milk is used for the on-farm production of artisanal cheese. 120 pigs feed on the whey (a left-over from cheese production) and left-overs from the vegetable production. All products are sold to regional wholesale and retail. The farm community is based on the principles of biodynamic agriculture and its closed-loop system. Three families started the farm community back in 1986. A lot of creativity and a solid concept were needed some years later when one of the families stepped out of the community farm and had to be reimbursed. Those difficult times have shaped the farms’ model. Ownership and use were separated making it easier for companions to enter and exit the farm community. View online

The family of the three brothers Christos Belides (32), Miltiades Belides (30) and Theodoros Belides (20) has a long history of wine producing. Their grandfather was winegrower in Constantinople and in 1922 he took some of his wine varieties with him to Greece. Belias wines cultivates 10 hectares of vines and operates a new winery with modern equipment. The brothers could make use of support from the funds of the European Union. However, Miltiades advises young farmers not to solely build their business on this support. In his opinion there is so much bureaucracy in Greece that – even though it might work – it will take so much time to fill all the papers and finally receive the repayments of your investments. Watch online

Apple observatory (Apfelsternwarte*) initiated by Simon Junge together with Star Garden Odyssey (Sterngarten-Odysee*) is a cooperative of self-managed customer groups and organic farms. Together they organise the cultivation, harvest and supply of fruit, juice and fresh vegetables and share the common commitment to community supported agriculture, good food and the build-up of humus.  Currently more than 60 households in Berlin and surroundings are supplied. View video